If we were insisting on honesty, we’d have to face a key fact about English usage rules, or the notion of ‘Correct Usage’ in general.  Most people could give less than ‘a tinker’s damn,’ as it were, about such matters.

Not so This Humble Correspondent, who is fanatical about style and usage and structure in the creation of text.  This first installment of H.U.G.N. launches this series, as a testament to that fanaticism.

Each little missive here will deal with one issue in the Usage/Style/Structure realm.  Before proceeding with today’s ‘lesson,’ clearing up the issue of bona-fides is probably a good idea.  “Who are you to ‘instruct’ me?”  I can hear the question through the ether.

So saying, I can report that in the past five years, in seeking freelance gigs that were primarily either invitations to slavery or outright scams, I have had occasion to take proctored grammar tests.  Each of these exams involved several thousand test-takers; one of them had roped in over ten thousand folks.

In each case, I scored in the top three tenths of a percent of those who sat and answered these long and grueling question-sets.  In addition, I’ll be happy to take a different approach to resolving any disagreement in this regard.  I’ll bet that my usage is almost always correct.  I’ll bet that I can find copious errors in most scribes’ work.  In other words, I’ll put my money where my mouth is and invite anyone who sees things differently to do the same.

Is correct usage ‘truly important?’  One may come to different conclusions in answering this question.  And, clearly, usage changes over time, so the concept of some immutable grammar-for-the-ages, a type of Platonic Syntax, so to speak, is almost certainly nuts.

For purposes of this series, readers may rest assured that This Humble Correspondent affirms both the utility and necessity of formats that guide our textual behaviors, as it were.  More to the point of personal proclivity, the whole area exerts a fascination that is irresistible.  That’s why this essay exists; that’s why the invitation goes out to any writer happening by to take a look and ponder.

THE PROBLEM AT HAND HERE

Now then, here’s what I’ll be looking at today: currently, the choice of how to punctuate a list is a matter in dispute.  True enough, most authorities that care more about meaning than convenience—in other words, academic, scientific, and legal guidelines, for example—do insist that placing a comma after the penultimate item in a list is essential.

The name for this convention is, according to the occasion, the ‘serial comma,’ the ‘Oxford comma,’ or the ‘Harvard comma.’  However, enormously influential providers of style-protocols—for instance, the Associated Press and the New York Times style guides—say the opposite, that such usage is neither mandatory nor desirable.  Moreover, both British and Australian rulebooks tend to look askance at this prescription.  The upshot of this opposition, furthermore, is that these more nonchalant guidelines have a lot of support among the second largest group of producers of narratives, which is to say corporate and commercial purveyors.

Obviously, one way to look at such controversy is that, as the saying goes, “There’s no accounting for taste.”  Or, one might say, “It’s just a matter of style.”  In such views, nothing substantive is at stake, so we needn’t really worry about which school of thought prevails.

I beg to differ.  This in itself seemingly inconsequential protocol can often enough have a substantial impact in terms of understanding.  More important, perhaps, this norm either supports or undermines the way that thinking occurs in relation to language.  In other words, information and knowledge themselves to a definite extend depend on such erstwhile formal matters.

WHY SERIAL COMMAS MIGHT BE IMPORTANT, IN THE FIRST PLACE

The first way that the serial comma is generally crucial is in relation to ambiguity or confusion.   Many authorities say that such difficulties are frequent.  Even the proponents of flexibility acknowledge the risk for occasional miscues.  This Humble Correspondent contends that at least the potential for misapprehension is universal whenever the ‘liberal’ standard mandates our practice.

Some examples would be apt at this point. 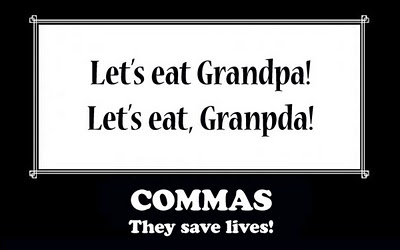 from Adr3nalin3: Books Worth Losing Sleep Over

An editor can try to back up the point here that the comma ought to be optional.  While for reasons that appear below, This Humble Correspondent finds such reasoning disingenuous or illogical, or both, the following thought is inevitably impossible to interpret exactly if the comma disappears.  “I want to be able to communicate about grassroots empowerment, to argue with those who dislike that possibility, that hope(,) and that desire(,) and to convey key components of my reasons for wanting these two things.”

However, even in much more straightforward cases, shedding the serial comma cuts down the ability to communicate nuance and complexity briefly.  Someone might write, more simply, “ I like pie.”  He might then add, “I like pie and other sweets.” 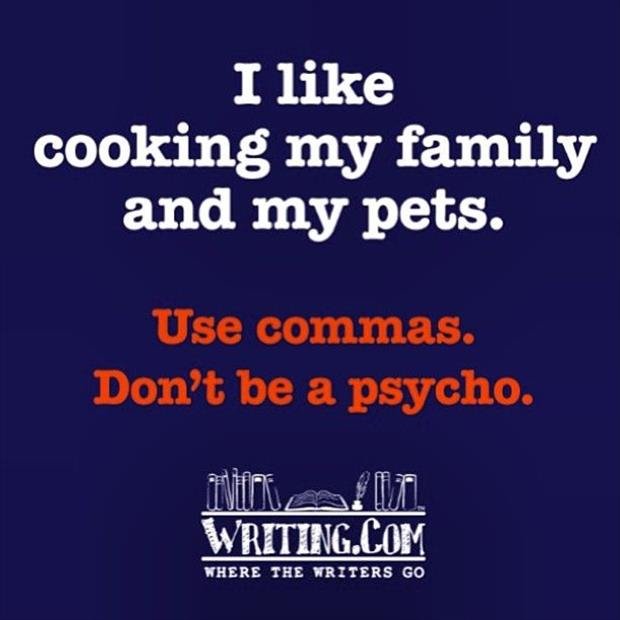 These kinds of possible examples have no limit.  Either we choose to allow confusion, obfuscation, and vagueness, or we insist on the serial comma for any list.

WHY SERIAL COMMAS MIGHT BE IMPORTANT, IN THE SECOND PLACE

The second sort of problem concerns the rationale for commas in the first place. Most basically, since writing indisputably rises from speech, if the strictures of writing disregard how we actually make what we speak sensible, then these strictures may well assassinate communication.

In this vein, the comma exists in part as a means of breath control, for the speaker, and as a mechanism for keeping discrete components separate, for the listener.  If we spoke in the way that A.P. and NYT commands direct us to write lists, people’s eyes might quickly glaze over, and any hope of following a string of ideas would soon become hopeless.  The consequences of such eventualities would not only be dire for democratic dialog, but they could also hack away at the very capability to improve output and outcomes.

In contrast to such hypotheses, or scientific theories about language, depending on one’s orientation, many thinkers contend that writing and speech, on the one hand, and reading and listening, on the other hand, represent essentially immaterial acts that simply do not merit the same attention as ‘real’ aspects of life, say finding water or growing food or other such core components of animal survival.  In this vein, focusing on language is little more than ‘idealistic’ nonsense, one version or another of the belief that ideas determine existence.  ‘That’s just semantics!’

Once more, however, a different view is possible.  From such a perspective, language, in its mediation of material reality, becomes a core component of any instance of a human, concrete manifestation of experience.  For example, increased productivity and potentiality in these basic realms—agriculture, industry, and so forth—has always depended on communication.

As new techniques have improved mediation, concomitant gains in human wealth and power have, without exception, also come to pass.  Thus, if a certain ruling tendency undermines communication, then it would have to include the possibility to threaten us at a more fundamental level than that of ‘mere convention.’ 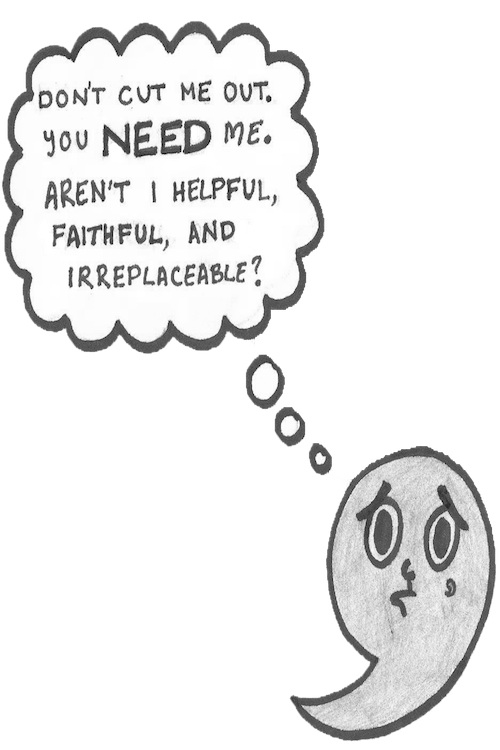 Why, therefore, do so-called ‘journalistic’ standards, which a vast swath of the corporate world deploy as gospel, fly in the face of common sense and the actual nature of grammatical meaning?  The most common justification is the great-God, Efficiency.   What this translates to, of course, is cash.

If the New York Times, which adheres to abandonment of the serial comma, publishes one billion pages a month, for instance, and discontinuing such commas saves it a single page—a very conservative estimate, given our propensity for little lists—then the shareholders at the Times get to keep the entire cost of purchasing, laying out, and printing and distributing that page.  Perhaps such calculations would project an extra hundred dollars to the company’s bottom line each fiscal year; in any event, the notion that wins out is that it all adds up.

Obviously, the same rubric applies to the Associated Press, which generates many more billions of pages per month, and so forth.  To a lesser overall extent, perhaps, but still in tangible ways, the same modes of thought seem valid to corporate communicators.

Are these factors meaningless?  No doubt they are not.  “For want of a nail…the Army was lost,” and so on.  The germane question though is whether these small gains in income, on the part of those who already own most of everything, justify attacks on comprehension and clarity and the way that language actually works in our brains and in our lives.  At the very least, This Humble Correspondent believes that such an attempted rationalization is a case of ‘paving the road to hell’ with supposedly honorable intentions.

Yet another possibility exists as well, which is not so friendly to the world of commerce and bean-counting accountants, whom we might otherwise forgive, to an extent anyway, because we sympathize with their understandable drive to save money and increase income.  In this latter view, more Orwellian, the very capacity to make sense of things with language is a threat to the rule of those who currently own the presses and the airwaves and the copyrights.

As Winston’s interrogator asks, rhetorically, in Chapter Five of 1984, “Don’t you see that the whole aim of Newspeak is to narrow the range of thought?  In the end we shall make thoughtcrime literally impossible, because there will be no words in which to express it.  Every concept that can ever be needed, will be expressed by exactly one word, with its meaning rigidly defined and all its subsidiary meanings rubbed out and forgotten.”

Is the choice to eliminate the serial comma a step in that direction?  On the one hand, an appeal to ‘slippery slopes’ can be a logical fallacy.  On the other hand, slippery slopes do exist.  This Humble Correspondent intends to err on the side of caution, maintaining that the serial comma is a critical aspect of clear thinking and a key connection between how we present our beliefs as speakers and how we convey ideas in textual situations.

← Tearing Down the Walls
Legacies of Social Equality & Social Democracy: →

Subscribe to the NWU At Large Blog via Email

We Appreciate Tips and Donations of Any Amount!